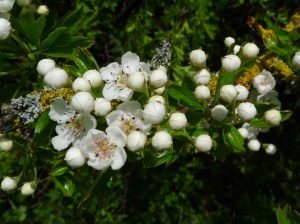 Ne’er cast a clout till May be out.

The first written record of this obscure saying was in Dr. Thomas Fuller’s, Gnomologia, 1732.  Word of mouth uses of the rhyme preceded this back to the 15thC, and was no doubt crystal clear to all who said and heard it.

Some of the confusion we have with the rhyme these days is that there are several meanings for both the word ‘clout’ and ‘May’.

Clout, even back in the 15thC, could have meant a clod of earth, a blow to the head, or even clotted cream.  However, they also had a meaning no longer in general use today, which refers to a fragment of cloth or clothing and it is this meaning they attribute to the saying.  Don’t cast off your winter layer until May be out.

Which brings us to the second source of confusion.  Clearly the word ‘may’, as in ‘it may be’, doesn’t fit the context here, but we have two other meanings for the word, both of which are linked, and may indicate hawthorn’s importance to our ancestors.  The arrival of the month of May co-incides with the appearance of hawthorn blossoms, those ubiquitous hedgerow beauties adorning field and roadside throughout the month.  These blossoms are also called May. Folklore has it that to adorn the outside of the house with May was seen as good luck, yet to bring it indoors was (and still is) a strong taboo.

Our saying, therefore, suggests that spring isn’t official until the hawthorn is in blossom.

In the autumn, the hedgerows turn deep red with hawthorn berries, and the branches sag with an abundance of the wonderous fruit.

Part of the rose family, this ancient protector of field and village is not only good for keeping bandits and wild beasts off your doorstep, it keeps illness away, too.

Hawthorn leaves are delicious to eat fresh, when young and soft, and make a good on-the-go snack for ramblers. They also make great tea, either fresh or dried.The flowers can also be added to the tea. 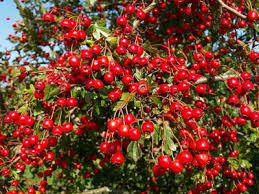 The berries, or haws, can be used in a great many ways, not least as a healthy food.  Just make sure you remove the hard pit in the centre.  They have a tangy, mild flavour similar to apple, though the skins can be tough if left on the tree too long.

There has been much recent research into hawthorn’s use as a medicine for heart conditions, and the plant is now being researched as a safer alternative to digoxin. Trials have shown a great deal of promise, and the use of hawthorn as a heart-health and cardio-vascular medicine is now taken seriously.

Hawthorn can help with 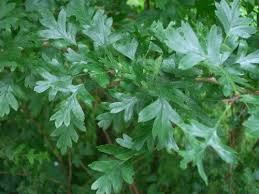 Because some of these conditions can be life-threatening, always refer to your GP before attempting self-treatment.

Self-published writer of High Tide in the City and 2nd Life of Bethany Sweet. Staff writer on Writers Anon Taunton and (bizarrely) a vegan caterer who makes cheese from all kinds of weird stuff.

I saw a bunch of these this weekend and wanted to identify them, thank you!

They are everywhere in the countryside (and in towns), and the blossoms are out at the moment. Just watch out for the thorns if you want to pick them!

Where to find us: